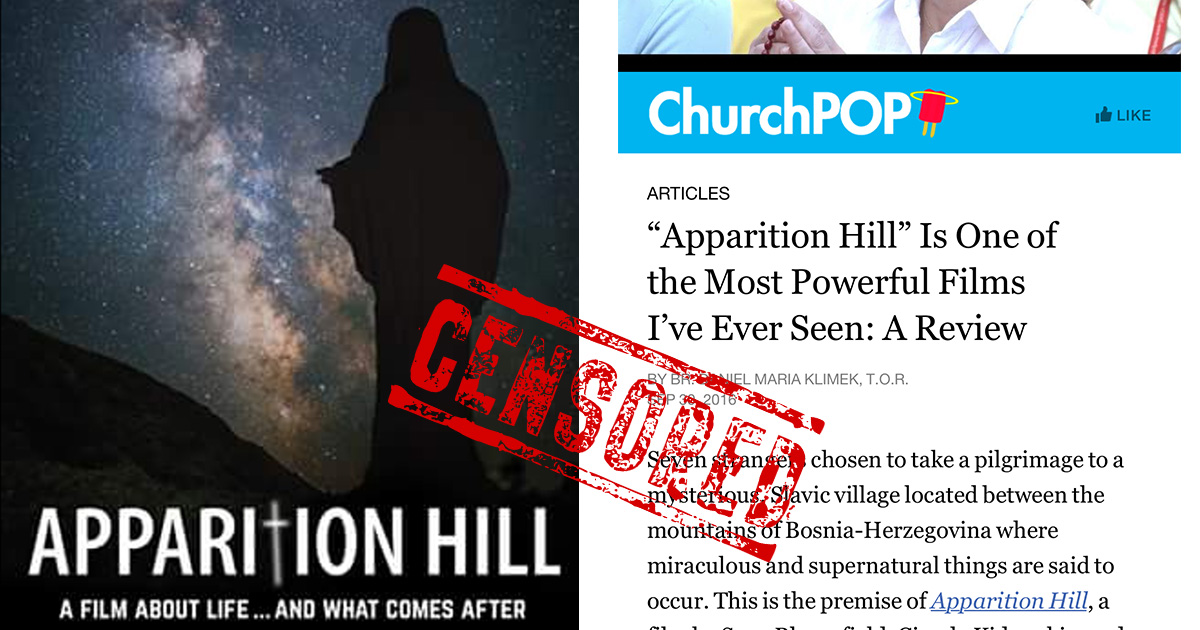 An editorial by Sean Bloomfield, director of Apparition Hill

Our film is about to open in over fifty theaters, but some people don’t want you to see it. 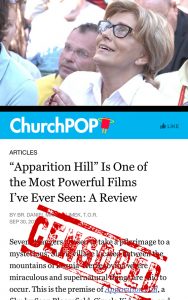 After a viewing of Apparition Hill, Franciscan brother Daniel Klimek TOR was inspired to write a movie review about it. Br. Daniel’s article reiterated what many audience members report: watching the film was a life-changing experience.

But within 24 hours, ChurchPop removed the article because they do not want to endorse Medjugorje.

(Insert sound of another Catholic news site sticking its head in the sand.)

Their decision made no sense to me, because Br. Daniel’s article did not endorse Medjugorje; it endorsed a film—a film which the editors or owners of ChurchPop evidently don’t want you to see.

Why is the Catholic media so afraid of a documentary film that investigates a little village in Bosnia-Herzegovina? For over 35 years, six locals—and millions of Catholic believers—claim that the Virgin Mary has been appearing there, delivering messages and secrets about the world’s future.

Aside from the multitudes of lay people who travel there, many Cardinals, Bishops, priests, and other religious have made the journey and expressed their belief. Medjugorje is as Catholic, and as catholic, as it gets.

Even though the Vatican has yet to issue an official ruling on the Medjugorje phenomena, many in the Catholic media have no problem publishing anti-Medjugorje articles, but when it comes to anything positive, no way. Why the bias?

In most cases, what we’re up against is not even just bias. It’s silence.

“Shhhh…” say Catholic news editors. “Every year, millions of Catholics go on pilgrimage to Medjugorje, filling confessionals, attending masses that are con-celebrated by 500 priests, deepening their prayer life and returning to the Church… but we think it’s better to just stay quiet about it.”

Does this make sense to anyone? Basically, it insinuates that the Catholic media thinks you’re not smart enough to think for yourself. 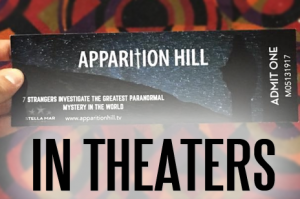 What surprises me the most is that ChurchPop’s decision was not in response to some kind of pro-Medjugorje propaganda—it was in response to an unbiased documentary film showing in theaters around the world, one which is even being submitted to the Academy Awards.

I mean, think about it—we brought atheists to Medjugorje and filmed their experience, and every cast member loved the way we portrayed their stories accurately. Can anyone accuse us of stacking the deck?

In fact, we took great pains to keep the film objective from the very beginning. We had an online video contest seeking “skeptics, atheists, agnostics and people suffering with problems” with one guideline: the entrants could not have ever visited Medjugorje before.

We chose seven people and filmed them before, during and after their pilgrimage. The cast included not one but two atheists, a Catholic convert skeptical about Marian apparitions, a drug addict, a man suffering from ALS, a young mother suffering from stage four cancer, and a widower raising nine children by himself.

We wanted an unbiased group so that we could film their experiences and let the audience decide what they thought about Medjugorje. We wanted realism. As a result, Apparition Hill is being praised by people of all beliefs and backgrounds, from Catholics to atheists. 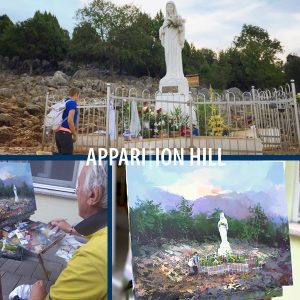 On the other hand, those who made the decision at ChurchPop clearly haven’t seen Apparition Hill. In the same way, I don’t think anyone can be vehemently against Medjugorje if they’ve spent time there. Even the Church has taken a wait-and-see approach.

But not the media…

“Shhhh… There’s a movie in theaters now, made by Catholic filmmakers, investigating what may or may not be the biggest miraculous event since New Testament times, but it’s better if you just pretend it doesn’t exist.”

Look, I understand why some people are skeptical of Medjugorje, especially those who have never been there before. I am one of the most skeptical people I know, and when I first went to Medjugorje 16 years ago, I wasn’t sure what to think.

But I recognized this: Medjugorje is either the biggest hoax in the history of mankind, or it’s the biggest miracle since Jesus walked the earth.

If that’s not worth investigating and chronicling as a journalist, I asked myself, then what is?

Just like Medjugorje, Apparition Hill isn’t just for Catholics; it’s for everyone. But regardless of whether you believe in it or not, Medjugorje is an inherently “Catholic” matter. Millions of Catholics have been there. Millions believe. So, ChurchPop, I simply ask: isn’t it worth investigating? Researching? Discussing?

More pointedly, just what are you afraid of?

Although I might sound upset, I’m really not. I’m used to this. In a way, it’s even kind of exciting to be telling a story that so many people want to hide. But obviously, I’m disappointed in ChurchPop’s decision—and not only because I’m a fan of their work and the way they present our faith as joyful and deep at the same time. Many of their articles are awesome. Overall, I’m disappointed in the general apathy and apparent fear of Medjugorje shared by other members of the Catholic media.

But it’s nothing new. As filmmakers trying to get people to see a film about Medjugorje, we feel like David vs Goliath: we lack the marketing funds of a big studio, and we get little support from Catholic media, and even less from the secular media. And yet, somehow, our film is selling out in theaters around the world and has brought a large number of people to the Church. That, alone, gives us a great amount of peace.

So, perhaps it has to be this way.

In Mirjana Soldo’s auto-biography, My Heart Will Triumph—which I had the honor of helping with—she describes in chilling detail how the communists persecuted her because of her claims. Most people might have hated the communist policemen, but Mirjana took a different approach. She writes: “After every harsh interrogation, I asked God to give me more love, and to help me understand. I came to believe that even the policemen were instruments. I was not sure why, but it seemed like they had to be as they were, even when they were shouting and cursing.”

In a similar way, some might say that the persecution Jesus endured at the hands of professed believers simply had to be, and, if the claims of the visionaries are true, then maybe it has to be this way now for Medjugorje. Whatever the truth, we trust it will prevail.

Without much support on the outside, it’s up to regular people who believe in our work to help us fund the film and get it out into the world. In that way, our fearless supporters, screening hosts, and members of our Promo Team have rallied around us and formed a grassroots community that is truly making a difference. We’ll take that over press promotion and studio backing any day!

Still, it would be nice to get a little more love from our colleagues in the Catholic media. After all, regardless of whether or not the reported apparitions are true, it seems strange to ignore them. Too many people have been affected by Medjugorje for the Catholic media to just pretend it doesn’t exist. 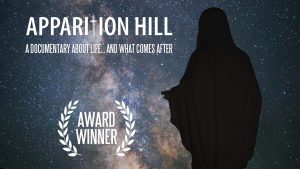 In conclusion, I simply want to suggest this to all members of the Catholic media: Pull your head out of the sand. Open your eyes and look at Medjugorje. It won’t bite.

If you think it’s your job to decide what Catholics can and cannot watch, then surely you must trust your instincts enough to watch a documentary film about Medjugorje and still decide for yourself what to believe.

And hopefully you will come to respect your readers enough to feel that they’re smart enough to the same.

P.S.: Here’s an offer and challenge for ChurchPop. Watch the movie and then let us (and your readers) know what you think. See showtimes here. 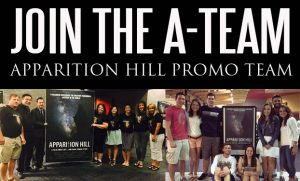